In the group of junctional EB generalized intermediate (JEB-gen intermediate) is the most prevalent one. In adults, JEB-gen intermediate is characterized by generalized blisters on mechanically challenged body sites. Lesions may progress to form superficial ulcers, crusted lesions, fissures or deep ulcers. Recurrent blistering leads to atrophy, pigmentary disturbances, erythema (poikilodermatous appearance) and faint stellate scars, while severe scarring and milia are rare [6]. In contrast, infants and children often fail to demonstrate many of these clinical manifestations and resemble patients with other forms of EB. Other clinical features include a progressive, typically diffuse, incomplete alopecia that -after normal scalp hair growth in childhood- becomes apparent by end of first or second decade. Dystrophic or absent nails with age after repeated trauma [7], dental enamel hypoplasia and caries, as well as EB nevi are also seen. Involvement of mucous membranes tends to be more notable in infancy and early childhood and is, in contrast to JEB-gen severe, usually moderate and without scarring. However, 12% of JEB-gen intermediate patients experience potentially life-threatening airway obstruction due to tracheolaryngeal stenosis or obstruction. This complication almost exclusively occurs within the first 2 years of life [8]. Affected individuals may also suffer from esophageal webs and strictures, urogenital alterations resulting in renal dysfunction and eye manifestations. Development of squamous cell carcinomas is uncommon in JEB-gen intermediate [9, 10].

JEB-gen intermediate is mostly autosomal recessively inherited in the COL17A1 gene, although dominant inheritance has been documented [11, 12]. As a consequence, triple helix formation, leading to partial unfolding of the ectodomain, decreased thermal stability and intracellular acculuation, as well as posttranslational modifications or protein targeting to the plasma membrane are interrupted [13].

Despite the fact that most mutations lead to premature termination codons, their consequences and resulting phenotypes are difficult to predict and require analysis on mRNA and protein level. A molecular profile of a PTC on one allele and a missense or in-frame splice site mutation on the alternate allele may thus allow the production of small amounts of a truncated or altered polypeptide with certain residual functionality. Such variants then retain the ability to be incorporated together with laminin-332 within hemidesmosome-anchoring filament complexes, thereby mediating a milder/moderate phenotype compared to JEB-gen severe.

In addition, presence of revertant mosaicisms can interfere with the disease severity, presenting with an atypically mild phenotype of nonlethal JEB [14]. Different genetic mechanisms have been implicated for this phenomenon, including intragenic crossover, second-site mutation, mitotic gene conversion or true back mutation [15, 16]. In some cases, nonsense mutations cause mild phenotypes because of alternative splicing mechanisms [17]. Alternatively, JEB-o may underlie PTC-prone insertions, deletions, splicing and nonsense mutations as well as missense mutations within the LAM genes that code for the subchains of laminin332 may be found [18]. 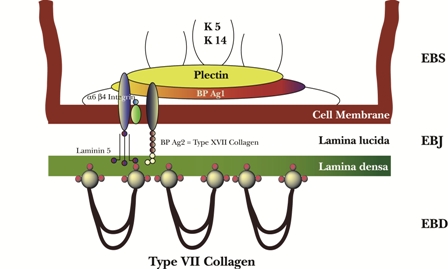